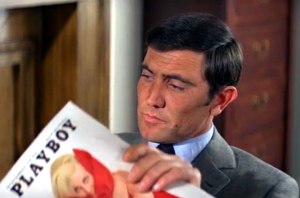 Back in the late 60s, somebody gave my father a birthday present of a jigsaw puzzle. It was a Playboy centerfold of a playmate wearing nothing but argyle socks, and it was packaged in a little canister that he put up on a shelf above his suits and ties. If you were a boy of that era and you wanted to see a girl with her clothes off, and I’ll confess that I was one of those boys, you had to do things like make sure everybody was gone, take a stepladder into your dad’s closet, and give yourself enough time to assemble a jigsaw puzzle. Parts of one, anyway.

You couldn’t just buy your own copy of Playboy (I found out later), because they were sold over at a separate stand that was presided over by a gimlet-eyed old coot who knew exactly what you were up to. You couldn’t even look at the cover, because the stack of copies was behind a wooden plinth with a bunny logo on it. Playboy belonged to Adult World, and it was separated very firmly from Kids’ World. You could peek through the fence sometimes, but it remained remote and tantalizing.

This was the very uptight, knees-together America that Hugh Hefner slowly pried open. Impossible now to recapture the guilty thrill of being a young boy looking at a Playboy centerfold. Not just the photo, but the fact that it was three times the size of the magazine, and if you were actually able to pull it out, you were making a statement. You weren’t just looking at pornography, you were holding a poster of it with both hands. No hiding it. Something about this act of assertion got into your blood, gave you a first taste of what it might be like to be that unimaginable thing: a man.

There’s a moment in the best James Bond film, On Her Majesty’s Secret Service (1969), when George Lazenby is cracking a safe, and in this highly tense moment while he’s waiting for the decoder to finish working, he picks up a Playboy and glances at the centerfold. Just to be cool, you know. Sixties Bond was the Sort of Man Who Read Playboy, and I will risk branding myself as an old coot when I say we lost something when the Bond movies lost their blatant sexism. Yes, women had to endure the Male Gaze, but they were a lot wiser about it than you think. The blatancy of it looks faintly absurd now, but guess what? It was absurd then, too, but people had something back then called a sense of humor. Pussy Galore — that was a joke, son, and everybody was in on it. The joke kind of wore thin by the 70s, and nothing ages worse than a previous generation’s idea of what’s naughty, and of course for me like everyone else, the reality of becoming a man was nothing like the fantasy. Bond cried at the end of OHMSS, cradling the body of the strong, resourceful, beautiful woman he loved. That might have been a clue.

So yeah, we started reading it for the articles. And in fact the articles were often really fine: long, detailed, and informed by the publisher’s intelligence and taste, and Libertarian politics that now look leftist. Slowly and subtly things changed… life became serious and complicated and the forces of Puritanism that Hefner seemed to have vanquished just became meaner, more punitive, and more dangerous. I was reading Playboy on December 8, 1980, in the dim, cavernous basement of the department store where I sort-of worked the night shift. A young man by that point, I was having my own adventures, grimy though they may have been. I was drinking a beer and paging through an epic, exhaustive interview with John Lennon on the occasion of his first album in five years. I was halfway through when my friend Gary called to say Lennon had been shot. There were no cellphones then; he had to call the store and make them find me. The interview went from being a hopeful new beginning to a tragic remembrance right in the course of reading it; that long night of blood and sorrow turned out to be the overture to a decade of ugly new political realities. Culturally, psychologically, energetically, the 60s died that night. How fitting that I had a Playboy in my hands.