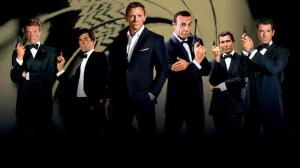 In honor of Quantum of Solace, here’s a short history of my life, measured out in Bond movies.

Goldfinger. Wow, a toy car that has guns and an ejector seat! I am a little kid and nothing could possibly be cooler. Not even robots.

Thunderball. It’s all about the Aston Martin. Even the producers know it, because it makes an appearance in scene one, bizarrely shooting water out of its exhaust pipes. I am seven now and this is cool, cool, cool. But the movie is long, long, and half underwater. I fall asleep.

You Only Live Twice. Takeme takeme takeme! No? Why the hell not? I fume with impotent rage in the backseat of our Chevy Impala as we drive past the theater. Aw Daddy, doncha love your little Eddie?

Dr. No/From Russia With Love. Reissued with Goldfinger. Mom and Dad dump me at the Saturday matinee… undoubtedly to get rid of me for six hours. Excellent plan. It’s a win-win.

OHMSS. Doesn’t have Connery, so who cares? It’s the end of the 60s. We have all the time in the world.

Diamonds are Forever. Connery is back; this is big. Now I’m 13, and my father takes the whole family. But it’s Easter Sunday and I am sitting next to my grandmother, who is also a minister. Awkward. You know something? Dad can be kind of passive aggressive.

Live and Let Die/The Man with the Golden Gun. Watergate, the weary end of Vietnam, cutesy ragtime music on the radio, and Roger Moore as James Bond. Nobody who lived through the 70s will ever be nostalgic about it.

The Spy Who Loved Me. Wow, a submarine Lotus. I’m a jaded teen now, but this is hot. Ditto Barbara Bach in her black dress. Plus I am old enough to drive myself and my friends to the movies. Things are looking up.

Moonraker. I see this on my first big travels alone, in a grimy grindhouse on a drizzly, icy summer day in San Francisco. The audience is 90% homeless and drunk and happy to be indoors, even watching this gawdawful movie.

For Your Eyes Only. Bonding with Sean MacFalls, who I meet working a loading dock and who is as big a fan as I am. Around this time I see Thunderball on TV while stoned and notice how badly made it is.

Octopussy. Roger Moore is assuming the leathery appearance of an old satchel. Sean MacFalls calls the movie an All Time Low. Little do we know that next up will be…

A View to A Kill. I am married now. Rebecca yells rude things at the screen about Roger Moore’s lack of sex appeal. That’s my girl.

The Living Daylights. Tim Dalton is a breath of fresh air. The new Aston Martin has some cool gadgets… The Pretenders song at the end is terrific. Things are looking up again.

License to Kill. I’m a dad now. Can’t be bothered, except to note that Dalton looks shamefaced about being in this crappy movie. The violence is sickening; the sex is non-existent. Oh, right, it’s the Reagan era.

Goldeneye. Six years have passed. We’ve moved to New Jersey. My coworker does a hilarious impression of Tina Turner growling out the title song. She also imitates Connery’s lascivious Bond. I have a pretty big crush on my coworker. But I skip the movie.

Tomorrow’s World is Not Enough and Dies… whatever those Brosnan movies were called. As a martini drinker, I notice Pierce orders them wrong. I realize I am more sophisticated than the man playing James Bond. And that’s just not right.

Die Another Day. It’s cold and rainy outside the theater. Manhattan is a bleak, sad, empty place after 9/11. Tough room… but then, every single man in the audience groans in unison as Halle Berry wades out of the Cuban surf. And we feel better.

Casino Royale. As played by Daniel Craig, James Bond is battered, vulnerable, and at long last a real man. This is the first Bond movie that Rebecca actually likes. Afterwards she asks me to make her a Vesper. Once you’ve tasted it, that’s all you want to drink.

November 1, 2008 By eddieselover in Explorations, Pop Culture Leave a comment

Have you read anything by Studs Terkel? He was the epitome of a Chicago writer — a stogie chomping, whiskey drinking tough guy, with the bullshit detector always on. Looking the hard truth right in the eye without fear and with quiet, steady, understated outrage.

“I never met a picket line or a petition I didn’t like,” he once said. Like the great lyricist E.Y. Harburg, he was a lifelong, unapologetic left-winger, and his politics was driven not by either idealism or grievance, but by intimate knowledge of how real people actually live, and how government policy actually affects them.

And the best, most beautiful thing about Studs was that he went out and talked to those real people, interviewing them with great love and patience until they had given up their “gold,” as he put it… and then he used his own writer’s gifts to edit and shape their words to reveal their eloquence. He once commented that Americans have a natural intelligence and wit, which is true, but it takes a shrewd man to see that, and a great man to put his own gifts in the service of it.

When Studs was 89, about seven years ago, a young journalist went to talk to him — and found him halfway through a cigar at 10 a.m. Studs offered him a glass of scotch because, he said, it was too early for martinis. They talked about the art of turning an interview, with its garbled syntax and false starts, into readable prose. Among other things, Studs said this:

“A guy stopped me once—I did Working, and had all kinds of portraits, and one is the portrait of a waitress, Dolores Dante, she used to work at the Erie Cafe, when it was an expense-account joint. She was great. She talked about the day of a waitress. So one day this guy stops me on the street, and he corners me, on Michigan Boulevard Bridge—you know, people stop me now and then, not celebrity, just me, you know, they know me. He says listen, I want to tell ya—since I read about that woman Dolores in your book Working, I’ll never again talk to a waitress the way I have in the past. I’ll never again. Well that’s pretty good. That means I’ve touched him.”

I love ya, Studs. Rest in peace.