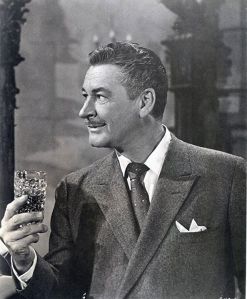 Too Much Too Soon  is one of the earliest examples of Hollywood eating its own. Lurid and sleazy, it’s like those cheap 50’s paperbacks that trashed famous people’s lives in the most obvious ways. Yet it remains fascinating, in a heartbreaking and horrifying way, because of its star: Errol Flynn.

Flynn had just come back from years in the wilderness — making one lousy European movie after another while drinking and drug addiction ate away at his self-confidence, his focus, and his looks. At the 11th hour, Darryl Zanuck rescued him by handing him the part of Mike Campbell, the dissipated wastrel in The Sun Also Rises. That excellent performance reawakened Hollywood’s interest in Flynn, and he was offered the part of his old drinking buddy John Barrymore in this bio of Barrymore’s daughter Diana (based on her own cheap paperback, also called Too Much Too Soon).

A soberer man might have rejected this exploitative little production, but at this stage of Flynn’s career, it was like being offered “Hamlet.” He even swallowed his actor’s vanity, allowing himself at age 49 to be cast as a man ten years older, and looking it (at one point in the film, he states his age, but only after a beautiful, telling little pause).

In fact, he wasn’t well cast. Barrymore was a hard, sharp, tough actor — a little guy who went for “big” stylized flourishes in his performances. As copious amounts of liquor gradually coarsened his skills, he descended into grotesque self-parody: waggling his eyebrows and bulging his eyes lasciviously at nothing, rolling his Rs and exaggerating his own cultured diction. Flynn evokes him, but not by behaving anything like him. Despite his swashbuckling reputation, Flynn was a sensitive, gentle performer with a gift of wry humor and rakish charm. His own alcoholism seemed to soften and diffuse his acting while at the same time giving him some inner freedom to finally externalize his rage, shame, bitterness and impotent longing. All of which he puts to effective use in this film, essentially creating a self-portrait with slight Barrymore echoes (the tilt of a hat brim, for example, or standing with body facing the camera but head held in profile).

Unfortunately, he does most of this without much help from the script. It’s a sort of dull soap-opera version of Sunset Boulevard, with the has-been Barrymore rattling around his mansion and his yacht longing for love, or something. In fact the best line in the movie was spoken by Flynn on the set, responding to instruction from the fourth rate, no-name director… drawing himself up, Flynn replied “Are you, Art Napoleon, telling me how to play a drunk?” There’s an unfair perception that Flynn played his final three roles, all of them alcoholics, the exact same way… that he was in fact not acting, but only playing himself. Not true. In The Sun Also Rises, his Mike Campbell is a superficially charming drifter continually being stung to anger by the evidence of his own impotence and irrelevance (and in acting terms, he holds several scenes together single-handedly). In The Roots of Heaven, he’s a cowardly military man tortured by guilt about his own weakness. In this movie, he plays Barrymore as he no doubt had observed him himself: as a broken man occasionally able to pull himself together and show his former stature, but crumbling slowly from the inside and painfully aware of it. Flynn’s uncompromising portrait of greatness in ruins is finally quite haunting, as he intended.

Halfway through the movie, Barrymore dies, and we’re supposed to remain interested in Dorothy Malone’s cartoonish, by-the-numbers Diana. But the movie dies along with Flynn, and there’s nothing left to watch but Ray Danton’s comically phallic tennis bum. Each successive scene is less interesting than the previous one, and Diana’s last-minute pullout from the tailspin of her life is the least convincing of all. In fact, Diana died a couple of years later, from an overdose of booze and pills, at 38.

As for Flynn, in real life he exercised his usual gift for snatching disaster from the jaws of success, using the filming as an opportunity to begin an affair with a girl on a neighboring set. She was Beverly Aadland, a 15 year old extra. Flynn had been tried for statutory rape in the 40s, an event which precipitated his downward spiral, but by this time he was living down to his reputation. After his death a year later, the girl’s mother Florence Aadland wrote (or rather, dictated) yet another sleazy paperback: The Big Love, the story of Errol and Beverly’s “romance,” and one of the craziest and most disturbing of all Hollywood memoirs.

In The Big Love, Flo describes the three of them attending a screening of Too Much Too Soon. Flynn was embarrassed to have revealed so much of himself, but also quietly proud of his work. As he should have been. Despite the fact that it’s a bad movie by any formal measure, it gets way under your skin thanks to his courageous and devastatingly sad performance. Despite everything around that performance being hollow — script, direction, acting — it still rings true.