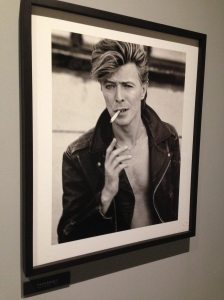 One of the funniest and most lovable tributes in music is the live version of the folk duo Flight of the Conchords singing “Bowie’s in Space,” aka the Bowie Song. There’s some sweet banter at the start that makes clear how much they love the guy, and then they go into the call-and-response song that’s a perfect mimicry of Bowie’s style: the bitten off diction, the severely affected vocals, the allusions to space and drugs and a strangely divided mind. Both Bret and Jemaine are Bowie, one at Mission Control, the other out in space. “This is Bowie to Bowie. Do you hear me out there, man?” “This is Bowie back to Bowie. I read you loud and clear, man.”

I’ve covered this song with my friend Derek and it’s a blast because I get to do my Bowie impression, which I’ve been doing mostly in the privacy of my car or shower for about 30 years now. I always felt a strangely personal relationship with David Bowie, and the outpouring of grief this week makes it clear that a whole lot of other people do too. Suddenly on social media there’s all this Bowie love, from so many different friends, some of them a surprise. The grief is more widespread, and more profound, than I’d have expected. It hit me harder than I expected, too. And I’ve been thinking about the reasons.

Well for one thing, he was so fearless. Looking like he did, David Bowie could have had a career like his one-time bizarro duet partner Bing Crosby… just coasting on looks and voice and a series of identical-sounding hits. Instead he boldly threw away styles and modes and set off in new directions. Sometimes those new directions were actually alienating — I didn’t always have the courage, openness, or patience to follow him. The fine pop culture writer Mark Harris tweeted something very apt: that Bowie was the first artist to make him feel scared.

Of course, he was also cool. Literally cool, with his bone-straight hair, cut-glass cheekbones and wiry frame. He used theatrical devices like makeup and glitter and wildly fashionable clothes, but not the way most people use them, to get some kind of cheap immediate response. He was removed, distant. He didn’t seem to give a fuck what you thought. But then he’d turn and give you a wink or a smile, and it always seemed like it was just for you. He learned a lot from Marlene Dietrich, who used the same aloof kittycat tools of audience seduction.

Like Dietrich, he had a tantalizing androgyny. He flirted openly with gender bending and gayness, and he did it in the early 70s when nobody else dared. Actually very few male performers dare to do it now. There’s Prince, but what’s interesting is that a lot of men casually despise Prince in a way they don’t despise Bowie. Again, he seemed to be dedicatedly following some internal compass, and that sense of personal integrity was so strong that he wasn’t subjected to the usual disrespect that keeps most bisexual men quiet about it.

Beautiful people get a pass, of course, and he knew he was beautiful. But like everything else, he was distant from his own vanity. He threw it away sometimes, with crazy haircuts or masks or disfiguring outfits. In his final, amazing video for “Lazarus,” released last week, he’s lying on a symbolic deathbed, his eyes wrapped in bandages. There are little metal studs where his eyes should be. It’s disturbing, and it’s frustrating, because we want to look at him. He knows it, too. You watch and you know he’s doing it on purpose. He’s teasing, like he always did.

Then you get to see him without the bandages… he looks ravaged but still beautiful. The voice is thinner, and rougher. The song and the video confront his own mortality very directly, but without a trace of self pity. There’s nothing maudlin; he isn’t trying to make you feel anything, or rather he isn’t trying to make you feel anything simple, like sadness. He’s staring at death the way he used to stare into space with his glassy faraway eyes. He’s seeing something the rest of us aren’t. It might be something terrifying, or it might be something wonderful, or it might be both. He’s not afraid. He’s reaching for it.

It takes a true warrior to make dying look cool. Maybe somehow I could be that strong, that honest, that self-assured and brave. I read you loud and clear, man.