April 30, 2011 By eddieselover in The Martini Shot Tags: Republicans Leave a comment 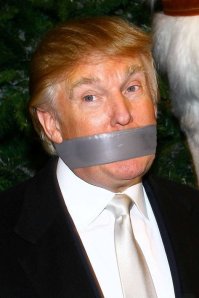 Back when I worked in Manhattan, it was easy enough to ignore him. You just stop looking at the billboards. You avoid his buildings — the giant letter “T” inlaid in the sidewalk is your tipoff. And for the past few years, I could always hit the mute button or fast forward through any commercials that showed him glowering and firing people.

But for the past week or so, the news media has been All Trump All the Time. They shake him in front of me like a squeaky orange chew toy, and I’ve been barking and lunging on cue.

I like to think I’m smarter than a dog, so as of now I’m taking back my power.

In metaphysics, it’s a core principle that when you resist something, when you feel passionate dislike for something or someone, you need to look at it more closely… because it’s some part of you that you’re resisting and hating. You need to identify that rejected part of you, and bring some love to it.

So the first metaphysical step is to ask myself, how am I like Donald Trump?

Is there some part of me that’s a fat, ill-spoken, spray-tanned blowhard with a bad comb-over, cynically appealing to people’s ignorance, fear and racism simply in order to get some attention?

Naturally, the first answer that comes to mind is: No, I don’t think so. I’m a slim, articulate, soft spoken man who wants to share a spiritual perspective and uplift people. That’s a given, right?

Trump’s pathetic and transparent attempts to improve his appearance? Well, they show how insecure he is about his looks, that he’s getting older and he’s fighting it. I can relate to that, actually.

The pompousness and the inability to shut the fuck up, long after people have tired of hearing the same old self-aggrandizing bullshit? Um, okay, guilty. Sometimes.

The insatiable need for attention and approval, even to the point of becoming negative in order to get it?

Well, what about it? There are appeals to the worst of human nature all around us. We’re being sold our own damnation everywhere we look. Nobody is forcing us to buy…. but buy we do. The people selling it just want our money, which in metaphysical terms means they want our energy and our power.

Maybe what’s at the bottom of our obsession with this guy is that there’s a little bit of him in all of us. If you stuck a bunch of microphones in our faces, maybe we’d all say we’re proud of ourselves even if we’d just been total jackasses. Maybe we’d all take out billboards with our faces on them, if we could afford it.

So, Mr. Trump — may I call you Donald? — I’m going to start giving you my real attention and power. I’m going to see myself in you: the scared little boy who wants to be noticed, who needs some approval, who will sometimes do unskillful things to get it.

But, you know… with one hand on the mute button.